Comments (0)
Add to wishlistDelete from wishlist
Cite this document
Summary
Falling trade barriers, free flow of money across borders, growth in world trade among countries represent the trend known as globalization which has allowed the large organizations to expand overseas. The process of globalization has enabled countries to source raw materials from anywhere, produce anywhere and market their finished products anywhere in the world. …
Download full paperFile format: .doc, available for editing
HIDE THIS PAPERGRAB THE BEST PAPER98.1% of users find it useful 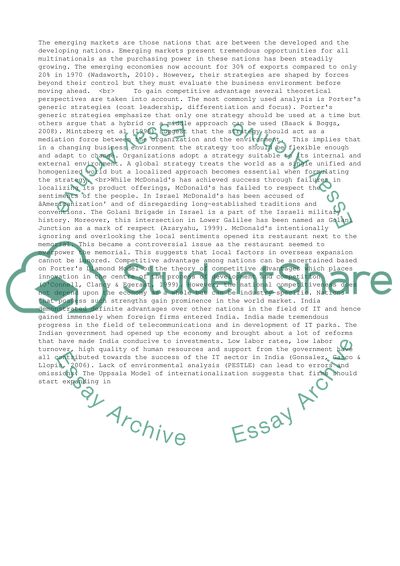 Download file to see previous pages The emerging markets are those nations that are between the developed and the developing nations. Emerging markets present tremendous opportunities for all multinationals as the purchasing power in these nations has been steadily growing. The emerging economies now account for 30% of exports compared to only 20% in 1970 (Wadsworth, 2010). However, their strategies are shaped by forces beyond their control but they must evaluate the business environment before moving ahead.
To gain competitive advantage several theoretical perspectives are taken into account. The most commonly used analysis is Porter’s generic strategies (cost leadership, differentiation and focus). Porter’s generic strategies emphasize that only one strategy should be used at a time but others argue that a hybrid or a middle approach can be used (Baack & Boggs, 2008). Mintzberg et al (1998) suggest that the strategy should act as a mediation force between the organization and the environment. This implies that in a changing business environment the strategy too should be flexible enough and adapt to change. Organizations adopt a strategy suitable to its internal and external environment. A global strategy treats the world as a single unified and homogenized world but a localized approach becomes essential when formulating the strategy.
While McDonald's has achieved success through failures in localizing its product offerings, McDonald's has failed to respect the sentiments of the people. In Israel McDonald's has been accused of ‘Americanization’ and of disregarding long-established traditions and conventions. The Golani Brigade in Israel is a part of the Israeli military history. Moreover, this intersection in Lower Galilee has been named as Golani Junction as a mark of respect (Azaryahu, 1999). McDonald's intentionally ignoring and overlooking the local sentiments opened its restaurant next to the memorial. This became a controversial issue as the restaurant seemed to overpower the memorial. This suggests that local factors in overseas expansion cannot be ignored. Competitive advantage among nations can be ascertained based on Porter’s Diamond Model or the theory of competitive advantages which places innovation in the centre of the process of development and competition (O’Connell, Clancy & Egeraat, 1999). However, the national competitiveness does not depend upon the economy as a whole but can be industry-specific. Nations that possess such strengths gain prominence in the world market. India demonstrated definite advantages over other nations in the field of IT and hence gained immensely when foreign firms entered India. India made tremendous progress in the field of telecommunications and in development of IT parks. The Indian government had opened up the economy and brought about a lot of reforms that have made India conducive to investments. Low labor rates, low labor turnover, high quality of human resources and support from the government have all contributed towards the success of the IT sector in India (Gonsalez, Gasco & Llopis, 2006). Lack of environmental analysis (PESTLE) can lead to errors and omissions. The Uppsala Model of internationalization suggests that firms should start expanding in ...Download file to see next pagesRead More
Share:
Tags
Cite this document
(“Strategies Of Multinational Organizations In This World Of Research Paper”, n.d.)
Retrieved de https://studentshare.org/business/1390524-strategies-of-multinational-organizations-in-this-world-of-globalization

On the other hand, these globalization standards are opposed by some critics and argue that globalization does not have to be a requirement for putting up a business in other countries, thus it is just a choice for entering a foreign market. Accordingly, standardization is applicable specifically to high-end markets and with accord to the market segmentation such as the trends that the young people patronize (Mullman, 2006) Regardless of the idea that globalization is mostly based on how the company standardizes the products, the home country still holds the profitability of the business as the economy affects how the foreign investors and other national sources back up the business (Stiglitz, 2006).
Making the world flat mak...
9 Pages(2250 words)Assignment
sponsored ads
Save Your Time for More Important Things
Let us write or edit the research paper on your topic "Strategies Of Multinational Organizations In This World Of Globalization" with a personal 20% discount.
GRAB THE BEST PAPER

Let us find you another Research Paper on topic Strategies Of Multinational Organizations In This World Of Globalization for FREE!