Comments (0)
Add to wishlistDelete from wishlist
Cite this document
Summary
It is expected that cancer cells will have a high rate of division and proliferation compared to the normal cells because cancer arises when there is a rapid growth of abnormal growth. In addition, cancerous cells are known to bypass the cell regulatory mechanisms.
The…
Download full paperFile format: .doc, available for editing
HIDE THIS PAPERGRAB THE BEST PAPER91.9% of users find it useful 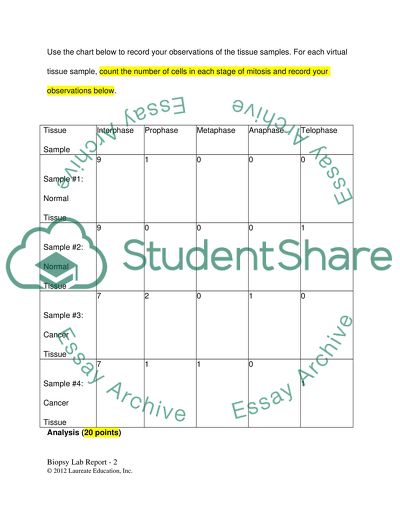 Biopsy Lab Report Up d 5/15/14 ________________________ _________________________ Please use this report form and simply “fill” in your observational data and conclusions.
Purpose: To apply an understanding of cellular division to distinguish between cancerous and noncancerous tissue samples.
Expected Observations (5 points)
It is expected that cancer cells will have a high rate of division and proliferation compared to the normal cells because cancer arises when there is a rapid growth of abnormal growth. In addition, cancerous cells are known to bypass the cell regulatory mechanisms.
Materials and Methods
The materials for this lab are embedded within the Cellular Reproduction Lab located in the week 3 resources section. You must view the acquired mutation section of the lab to reach the virtual microscope and tissue samples. There are four simulation tissue samples; each of which is “stained” so that you can observe the stages of mitosis in the sample cells. Select each sample with your mouse and “drag” it to the virtual microscope in order to observe the cells in each sample.
Results (20 points)
Use the chart below to record your observations of the tissue samples. For each virtual tissue sample, count the number of cells in each stage of mitosis and record your observations below.
Tissue Sample
Interphase
Prophase
Metaphase
Anaphase
Telophase
Sample #1: Normal Tissue
9
1
0
0
0
Sample #2: Normal Tissue
9
0
0
0
1
Sample #3: Cancer Tissue
7
2
0
1
0
Sample #4: Cancer Tissue
7
1
1
0
1
Analysis (20 points)
It was observed that 90 percent (nine cells) of the normal cells were in the anaphase stage of mitosis in the first sample while only 10 percent was in prophase. In the second sample, 90 percent of the cells were in anaphase while only 10 percent of the cells were in the telophase stage of mitosis. These two observations showed than in normal cells, only 10 percent of the cells were actively dividing at any given time. In sample 3, which was a cancerous tissue, 70% of the cells (7 cells) were in the interphase stage while 20 % (2 cells) were in the prophase stage. 10 % (1 cell) was in the anaphase stage. Similarly, in sample 4, 70 % of the cells were in interphase while 10% (1 cell) was in prophase, metaphase and telophase stages of mitosis. These findings showed that cancer cells have an abnormally higher rate of division and proliferation. Therefore, the results of the experiment were in line with the expected observations of the experiment.
These findings suggest that a general approach to combat cancer is preventing the abnormal multiplication of cancerous cells. One such way is through eliminating the cancerous cells, which can be achieved through chemotherapy as well as radiation therapy. Chemotherapy involves the use of chemical agents that target certain stages in the cell cycle of cancerous cells (Priestman, 2012). In addition, anticancer drugs work against certain proteins that are vita in the survival of cancer cells. Radiotherapy, on the other hand, is the utilization of high-energy radiations to eliminate malignant cells (Reilly, 2010). The two methods may be used concurrently. Another treatment option is the surgical removal of the malignant cells. Though the mode of action of the various methods may differ, all cancer treatment methods aim at eradicating the cancerous cells in order to prevent them from multiplying.
The findings of this lab have shown that cancer cells grow and multiply at a faster rate than normal cells. Additionally, this lab has been useful in illustrating the actual mechanisms that underlie the development of cancer as well as its treatment.
Conclusion (5 points)
It was observed that 90% of normal cells and 70% of cancer cells were in the resting stage or anaphase at any given time. Therefore, the rate of division and multiplication of cancerous cells was higher than in normal cells. Therefore, the most effective method of treating cancer was to prevent the proliferation of cancer cells by eliminating them. As a result, various methods such as chemotherapy, radiotherapy and surgery are used in the treatment of cancer.
A possible research question that has come up in this lab is “What is the cellular mechanism in the treatment of cancer?” Future experiments could look at cells from cancerous tissues that have been exposed to the various cancer therapies to illustrate their modes of action at the cellular level. The effects of the treatments in the various stages of cell division can then be illustrated.
References
Priestman, T. (2012). Cancer chemotherapy in clinical practice (2nd ed.). London: Springer-Verlag.
Reilly, R. M. (2010). Monoclonal antibody and peptide-targeted radiotherapy of cancer. Hoboken, NJ: Wiley. Read More
Share:
Tags
Cite this document
(“Mitosis, Meiosis, and Mutation Assignment Example | Topics and Well Written Essays - 500 words”, n.d.)
Mitosis, Meiosis, and Mutation Assignment Example | Topics and Well Written Essays - 500 words. Retrieved from https://studentshare.org/biology/1692599-mitosis-meiosis-and-mutation

CHECK THESE SAMPLES OF Mitosis, Meiosis, and Mutation

... that the cohesion of sister chromatids in mitosis and meiosis occurs. The cohesins of both meiosis and mitosis differ from each other on the basis of composition of their subunits. The kleisin subunit SCC1 of mitosis is replaced by Rec8 subunit in meiosis. However, in some organisms it is seen that the mitotic cohesins may appear in association with meiotic chromosomes. 3.2. Meiosis and Cancer Studying meiosis in depth is important because it can be targeted for cancer therapy. In 1963, it was shown that the extract of pacific yew tree bark inhibited cancer cell replication and also caused their death (Almeida and Barry 2011). The compound that was responsible for this effect happened to be discovered in the next four years and more four...
24 Pages(6000 words)Literature review

...?Mitosis and Meiosis A) Explain the events of (i) Meiosis and (ii) Mitosis. Explain the importance of meiosis in generating variation within the answer. There are 3 aspects that are critical for the survival of all organisms and they are growth, repair and reproduction. Division of cells is very important for these events. Division of cells happens through 2 different types of processes, the mitosis and meiosis which constitute different phases of cell cycle (Sadava, 2013). As and when needed, different hormones in the body of the organism send signals to the cells for preparation for division. There are mainly 2 parts in the process of division. The first phase is the interphase during which there is growth and preparation...
3 Pages(750 words)Assignment

...?Principles of Biology: Mitosis XYZ Section: UVW Magazine/ Journal: eLife Publication 20 Feb, of Article: Mitosis: Developing cell biology Page Number: p 1 - 3 Author (s) Name: Daniel Needleman Synopsis: Cell division is a basic phenomenon of life in living organisms. It is known that the process of cell division, irrespective of the animal species, remains invariably the same. It is here that we comprehend that despite being the different in their outward appearance this basic phenomenon invariably remains the same. In byline, the author of the article, Daniel Needleman, has said that experimentation has been able to understand the difference that exists in this cell division phenomenon among the animals. This difference is found out...
4 Pages(1000 words)Essay

Compare and Contrast Meiosis vs Mitosis

...?Running Head: MITOSIS AND MEIOSIS Comparison and Contrast of Mitosis and Meiosis of the of the Comparison and Contrast of Mitosis and Meiosis The eukaryotic cells get divided by partitioning its chromosomes into two indistinguishable sets of chromosomes and this process occurs in the nucleus of the cell, this process of cell division is called mitosis1. In simple words, the parent cell gets separated into two daughter cells that are similar to the parent cell in the process of mitosis. However, the process of meiosis can be described as the cell division that occurs through sexual reproduction of eukaryotic cells. The chromosomes that are created in the meiotic process contain dual copies of chromosomes that come from mother parent cell...
6 Pages(1500 words)Essay

Similarities and Differences in Mitosis and Meiosis

...Similarities and Differences in Mitosis and Meiosis This short essay compares and contrasts the twomechanisms of cell division viz namely Mitosis and Meiosis. It compares and contrasts the two processes with respect to their functions, locations at which they occur and mechanisms of the two processes. Eukaryotic proliferation and succession requires mechanisms which efficiently build up the multicellular structure and care capable of maintaining and replicating it. These mechanisms are presented in the form of mitosis and meiosis. The wear and tear of the body results in the sloughing of millions of cells everyday. Thus to replenish and balance the cellular functions, a mechanism is required which will be accurate and generate...
3 Pages(750 words)Essay

... Mitosis Mitosis refers to a form of cell division where the eukaryotic cells separate the chromosomes existingin its cell nucleus into two identical sets formed in two separate nuclei. Mitosis is generally succeeded immediately by cytokinesis also called cytoplasmic division which divides the nuclei into two cells that contain equal cellular components. The two processes define the mitotic phase of the cell cycle that divides the mother cell into two daughter cells that are identical (Snedden, 1-48). Mitosis is a complex process that takes place only in eukaryotic cells and the process is known to vary in different species. Animals for instance are known to undergo a form of mitosis called open mitosis. This is where the nuclear envelop...
1 Pages(250 words)Essay

...Running head: Mutation Mutation refers to changes in a genomic sequence. This genomic sequence may refer to the DNA sequence of a cell or the RNA sequence of a virus. Mutation in gene DNA changes the amino acids sequence of a protein encoded by the gene. For this case, the DNA sequence is interpreted in groups of three nucleotide bases called codons, and each codon specify a single amino acid (Gerstein, 2002). So what causes mutation? Mutation can happen spontaneously through molecular decay, or it can be induced by the use of mutagens (Sage, 2005). According to Gerstein (2002), spontaneous mutations on the molecular level can be caused by Tautomerism, depurination, deamination and stripped strand mis-paring. On the molecular level...
1 Pages(250 words)Admission/Application Essay

.... The resultant is the assurance that each new cell that will eventually form would receive only one chromosome from homologous pair. TELOPHASE I The spindle breaks down and the chromosomes uncoil eventually dividing the cytoplasm into two separate portions. Two daughter cells form. They contain exactly half of genetic information of parent cell. This is because they contain only one homologous chromosome. MEIOSIS II The following figure an overall view of the second phase of meiosis or meiosis II. The narration of the respected phases is presented after the illustration. Meiosis II is similar to Mitosis. Figure 2: MEIOSIS II PROPHASE II Spindle fibers form in each of the two cells. Chromosomes line themselves up with the spindle...
2 Pages(500 words)Assignment
sponsored ads
Save Your Time for More Important Things
Let us write or edit the assignment on your topic "Mitosis, Meiosis, and Mutation" with a personal 20% discount.
GRAB THE BEST PAPER

Let us find you another Assignment on topic Mitosis, Meiosis, and Mutation for FREE!