Comments (0)
Add to wishlistDelete from wishlist
Cite this document
Summary
The author of this coursework under the title "Functional Biology of Plants" focuses on the process of photosynthesis. It is stated here that photosynthesis and respiration are complementary processes of energy conversion in plant and animal systems…
Download full paperFile format: .doc, available for editing
HIDE THIS PAPERGRAB THE BEST PAPER92.7% of users find it useful 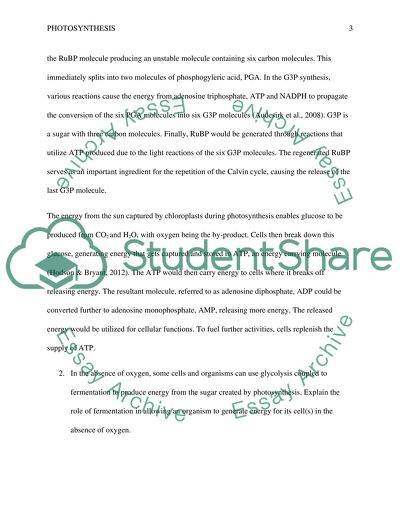 CHECK THESE SAMPLES OF Functional Biology of Plants

...?Functional Foods: An Enforced Need Vitamins and mineral added foods are very commonly available in market these days and the advertisement and labeling is made very attractive forcing the customers to buy these food products without knowing whether they require the additional vitamins and minerals or not. These foods with added minerals and vitamins are known as functional foods. Functional foods are prepared by manipulating the dietary composition of the ordinary foods in order to make them extra nutritious in terms of vitamins and minerals. This type of food materials are readily available in the market in the form of a number of food products i.e. juices, breakfasts, energy drinks,...
3 Pages(750 words)Essay

...and contribute to the process of evolution (O’Neil). 2. Explain energy flow in an ecosystem. Include examples An ecosystem comprises the living and non-living components within a given environment such as a pond, grassland or forest. The flow of energy is an integral part of the ecosystem which is necessary in order to facilitate the normal functioning of the ecosystem. The energy that enters the ecosystem undergoes transformation at different stages based on the processes involved in the system. Energy enters an ecosystem from the sun as light energy which is trapped by plants which are referred to as the primary producers. The energy then flows through the various trophic levels as primary producers...
3 Pages(750 words)Essay

..., the nucleus, and negatively charged particles called electrons that are found in orbits around the nucleus. Molecules are made up of two or more atoms, either of the same element or of two or more different elements, joined by one or more covalent chemical bonds. Cell1 In biology, it is the unit of structure and function of which all plants and animals are composed. The cell is the smallest unit in the living organism that is capable of integrating the essential life processes. Cells can be separated into two major groups—prokaryotes, cells whose DNA is not segregated within a well-defined nucleus surrounded by a membranous nuclear envelope, and eukaryotes, those with a...
2 Pages(500 words)Essay

...the patient breathe. While still negative of the disease, it is wise to pay attention on the prevention of the disease thru following good hygiene habits such as washing the hands frequently with warm soapy water, using separate drinking glasses and eating utensils, and coughing or sneezing into a tissue. Stay healthy and boost the immune system by eating healthy foods, sleep well, avoid smoking, exercise, reduce stress, and not drinking excessive alcohol (The Patient Education Institute, Inc., 2008). References Kimball, J.W. (2007). The Human Respiratory System. Biology. Last accessed online on April 10, 2009 at < http://users.rcn.com/jkimball.ma.ultranet/BiologyPages/P/Pulmonary.html> MayoClinic.com (2008). Pneumonia:...
2 Pages(500 words)Essay

...Functional Systems Functional Systems Affiliation This paper is based on scenario of The Lynx Company, “which makes use of a functional system for their sales system. It takes the orders from their salesman in the field, processes those orders in the office, sends the information to accounting, and distributes the pick orders to the warehouse for picking and delivery. Without a doubt, the system has been a great success for The Lynx Company.” As demonstrated in figure1, functional systems are used to support one functional area within a specific organization by increasing its internal efficiency and effectiveness. Basically, the Lynx Company is using the...
2 Pages(500 words)Case Study

...Importance of plants in solving real world problems Mosses and ferns can be described as an important foundation for the forest ecosystem as they help prevent erosion by creating a carpet on the forest floor. They are also important in maintaining the ocean ecosystem as they help provide oxygen into the sea; without them, the animals in the oceans would automatically die. Ferns are important as they help in the provision of an ecosystem to the lands; they are responsible for refining carbon dioxide in the air. Further, scientific research has shown that there are certain species of ferns that are important when it comes to the manufacturing of medicine (Germ 93). Conifers, on the other hand, reproduce from seeds. In...
1 Pages(250 words)Essay

...The Circulatory System of Vascular Plants versus that of Human Beings al Affiliation The Circulatory System of Vascular Plants versusthat of Human Beings Plants are indeed extraordinary in that they have systems that can be compared to those in human beings. The circulatory system of the plants has several similarities and differences when compared to the circulatory system present in human beings. The circulatory system is also called the transport system. Similarities The first similarity between the two systems is that they both transport important materials to the cells while taking away waste. In plants, cells require water and minerals for the...
1 Pages(250 words)Coursework

...Production Function Independent variable x. dependent variable y The curve shows the quantity of goods y produced as input x .represented by equation y=f(x). However, there are variable inputs that are used in the production such as labor and fuel. This curve shows the relationship between input and output. Production of goods y is possible with two inputs, this result in partial production function. The function has one variable input and the rest are assumed to be fixed at a certain amount. The output x is attached is attached to every value of y outputs amounts produced by these input. Points below the curve are also part of the quantity produced, this points represent inefficient...
2 Pages(500 words)Assignment
sponsored ads
Save Your Time for More Important Things
Let us write or edit the coursework on your topic "Functional Biology of Plants" with a personal 20% discount.
GRAB THE BEST PAPER

Let us find you another Coursework on topic Functional Biology of Plants for FREE!