Comments (0)
Add to wishlistDelete from wishlist
Cite this document
Summary
I. 1. The Rough Rider in the White House (1901-1909) refers to Theodore Roosevelt. He became the youngest president of the United States when President William McKinley was assassinated in September 1901. He was committed to make the government to work for the people and to regulated the great business trusts to foster fair competition without socializing the free enterprise system…
Download full paperFile format: .doc, available for editing
HIDE THIS PAPERGRAB THE BEST PAPER96.4% of users find it useful 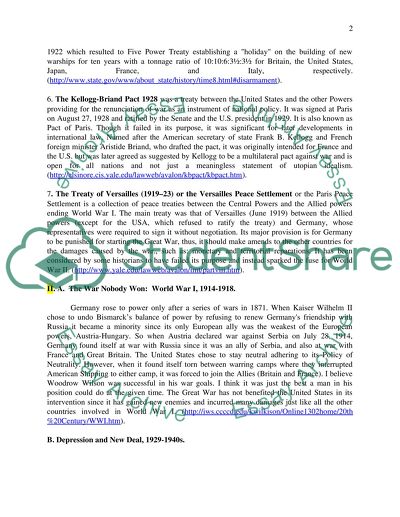 ...History Introduction: History is replete with exploits of conquests and rulers responsible for these conquests. Among the ancient rulers two s stand out one a Greek in Alexander the Great, and the other a Roman in Julius Caesar. Of the two Alexander is more, as he extended Greek influence into vast areas at a very young age. Alexander lived well before and for Julius Caesar he was a ruler to be respected for his exploits. Caesar conquests are comparable to Alexander, but are not equal, for Alexander and his Greek army were capable of taking on armies of the enemy with and coming out victorious with the minimal of losses to themselves. Alexander thus was a far better war tactician than Caesar. However when...
4 Pages(1000 words)Essay
sponsored ads
Save Your Time for More Important Things
Let us write or edit the essay on your topic "History" with a personal 20% discount.
GRAB THE BEST PAPER