Comments (0)
Add to wishlistDelete from wishlist
Cite this document
Summary
If z is the marginal propensity to spend out of national income, Y is national income and A is autonomous expenditure, then the simple multiplier is equal to
3) Consider the simplest macro model with…
Download full paperFile format: .doc, available for editing
HIDE THIS PAPERGRAB THE BEST PAPER91.3% of users find it useful 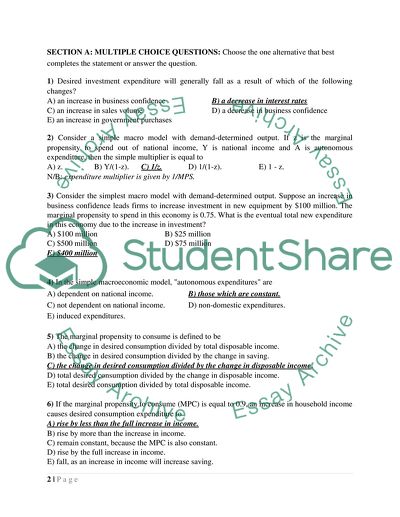 Now you are asked to do the following:
i) Calculate the level of income (Y), disposable income (YD), Consumption (C), and M (imports)
Y = C + I + G + X – M
Y = 200 + 0.75[Y-.25Y] + 100 + 500 + 200 – 0.2Y
Y = 1000 + 0.5625Y – 0.2y = 1000 + .3625Y
.6375Y = 1000
Y = 1568.6275, Yd = 1176.4706, C = 1082.353, M = 313.7255
ii) Is that economy having budget deficit or budget surplus? How much?
There is a budget surplus of 1481.48 -400 =1081.48
iii) Now assume that the tax rate has increased from 0.25 to 0.35 and MPC is changing from 0.75 to 0.9, what would be the new level of income (Y)
Yd = 0.65Y,
Y = 200 + 0.585Y + 100 + 500 + 200 – 0.2Y
Y = 1000 + .385Y
Y = 1626.0163
iv) Illustrate the change in Y from i) to iii) in AE and Y diagram
Question 16 (4 Marks):
Explain how the change in the following factors would influence the level of consumption?
i) change in the interest rate
Generally, a decline in interest rates significantly boosts consumption, for this induces individuals to borrow from banks; borrowings used for consumption expenditures. An increase in the interest rate, however, sends negative signals to the market, in effect, reducing borrowings used for consumption expenditures.
ii) the change in the expectations about future income
A brief look suggests that anticipated changes in income, which may entail tax changes, indeed impacts consumption in one way or the other. The precise effect, however, depends on whether the perceived changes are temporary or permanent. An anticipated cut on income will automatically reduce consumption expenditures. Increases in income will thus boost consumption. The challenge, therefore, depends on the specific expectations and contexts in which the increases or decreases are implemented.
Question 17 (4 Marks):
Each of the following headlines describes an event that will have an effect on desired aggregate expenditure. Which component (or sector) of AE would be affected? What will be the effect on equilibrium national income? Explain
a. Finance minister pledges to cut income-tax rates
The component of aggregate expenditure that would be affected with the minister’s pledge is the Consumption component. Basically, the announcement will leave workers with an increment in their income, giving them a wider leverage to consume more goods and services. Accordingly, equilibrium national income will also increase because consumption is but part and parcel of aggregated national income.
b. High mortgage rates discourage new house purchases
Changes in mortgage rates basically affect investments. By discouraging new investments, high mortgage rates will, therefore, reduce equilibrium national income.
c. Weak dollar spurs (increase) exports from Ontario manufacturer
Weak dollars dollar affects both exports and imports, in effect triggering the urge to exports more while discouraging imports. This results in the swelling of the equilibrium national income.
Question 18 (4 Marks):
Assume that the government of Canada (or the government of your home country, if you are a non-Canadian) hires you as an economist and the Minister of Finance is asking you to explain the idea of Multiplier. How would you explain it?
Among other things, Keynes, the father Keynesian economics, contends that any injection into the economy through investment and/or government expenditure produces proportional income increases that ultimately find way into the overall national income. The basic premise in Keynes theory is that such expenditures usually have carry-over effects which generate other expenditures, thus, the multiplier effect, which basically attempts to map out the size of such "carry-over effects".
More generally, the multiplier effect comes about due to additional demands for goods and services [injections] into the circular flow of income, in effect, stimulating further rounds of spending; that is, “one entity’s expenditures becomes another’s income”, and the circle continues, leading to a bigger effect both on output as well as employment. With $1 million, therefore, an investment into the energy sector would most convenient at this time. To be sure, the world has been reeling from the effects of global downturn with reverberations being felt throughout economy, right from the bases of production to the consumer at the very end; a fact that shows how intertwined our future is to the history has led us to the current circumstances. As it is, the energy industry supports more than 7 percent of the country’s employment either directly and indirectly. Each calorie of food consume, for example, requires certain amounts of fossil fuel, amount that rises with other special foods. From direct job creation to efficiency in other environments, we require energy. Read More
Share:
Tags
Cite this document
(“Assignment Example | Topics and Well Written Essays - 500 words - 208”, n.d.)
Retrieved de https://studentshare.org/macro-microeconomics/1681412-assignment