Comments (0)
Add to wishlistDelete from wishlist
Cite this document
Summary
1. I believe that in this case, the Court should rule in favour of Elin and reject Grapes & Vines Winery’s action. The contract concluded between the parties specified a deadline for performing the contractual obligations. It stated that the wine was to be delivered on or before May 1. …
Download full paperFile format: .doc, available for editing
HIDE THIS PAPERGRAB THE BEST PAPER97% of users find it useful 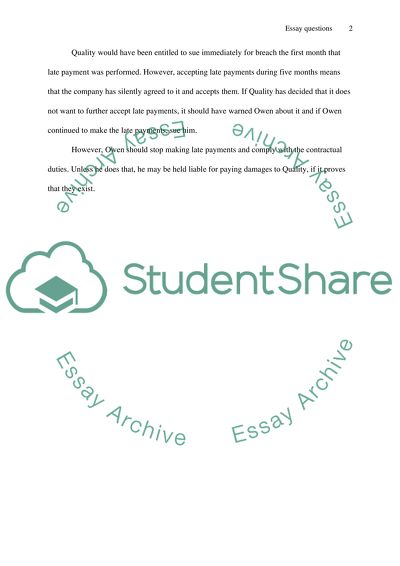 Essay questions I believe that in this case, the Court should rule in favour of Elin and reject Grapes & Vines Winery’s action. The contract concluded between the parties specified a deadline for performing the contractual obligations. It stated that the wine was to be delivered on or before May 1. Therefore, Grapes & Vines Winery could have delivered the wine anytime before May 1, as the contract did not limit their duty to perform only on May 1. However, they chose to do it in the last possible day – May 1. The fact that the delivery van was involved in an accident does not constitute an objective impediment to performing the contract (destruction of the subject matter of the contract cannot be used as an excuse in this case), as the winery most certainly had in stock enough bottles of wine to deliver them later that day to Elin. This is a certain fact, as the bottles were delivered in the afternoon of May 2. Moreover, immediately after the accident, the company should have called Elin and ask her if she would agree to a delivery of the bottles later that day or maybe on May 2. This would have solved the problem and avoid the unpleasant situation. Therefore, the Court should discharge the contract due to its material alteration and failure to substantially perform on behalf of the plaintiff (Grapes & Vines Winery). In this case, Elin’s contractual obligations would be also discharged and her not accepting the plaintiff’s tender later than the due date should not be considered as breach of contract. 2. I believe that in this case, time is not of the essence of the contract. Owen does still substantially perform its contractual duty, making the payments in the beginning of each month, which affords Quality substantially the same benefits as those promised. Quality would have been entitled to sue immediately for breach the first month that late payment was performed. However, accepting late payments during five months means that the company has silently agreed to it and accepts them. If Quality has decided that it does not want to further accept late payments, it should have warned Owen about it and if Owen continued to make the late payments, sue him. However, Owen should stop making late payments and comply with the contractual duties. Unless he does that, he may be held liable for paying damages to Quality, if it proves that they exist. Read More
Share:
Tags
Cite this document
(“LAW Essay Example | Topics and Well Written Essays - 250 words”, n.d.)
Retrieved from https://studentshare.org/law/1414659-essay-questions
(LAW Essay Example | Topics and Well Written Essays - 250 Words)
https://studentshare.org/law/1414659-essay-questions.
“LAW Essay Example | Topics and Well Written Essays - 250 Words”, n.d. https://studentshare.org/law/1414659-essay-questions.
Comments (0)
Click to create a comment or rate a document

CHECK THESE SAMPLES OF LAW

In th...
8 Pages(2000 words)Case Study
sponsored ads
Save Your Time for More Important Things
Let us write or edit the essay on your topic "LAW" with a personal 20% discount.
GRAB THE BEST PAPER

Let us find you another Essay on topic LAW for FREE!