Comments (0)
Add to wishlistDelete from wishlist
Cite this document
Summary
The war became declared in 1812 by the United States due to a number of reasons (O’Neill & Benn, 2011).
Among the reasons that resulted in the given War of 1812 were…
Download full paperFile format: .doc, available for editing
HIDE THIS PAPERGRAB THE BEST PAPER97.5% of users find it useful 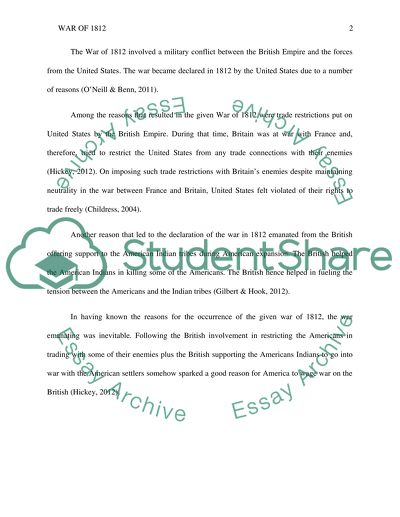 War of 1812 The War of 1812 involved a military conflict between the British Empire and the forces from the United s. The war became declared in 1812 by the United States due to a number of reasons (O’Neill & Benn, 2011).
Among the reasons that resulted in the given War of 1812 were trade restrictions put on United States by the British Empire. During that time, Britain was at war with France and, therefore, tried to restrict the United States from any trade connections with their enemies (Hickey, 2012). On imposing such trade restrictions with Britain’s enemies despite maintaining neutrality in the war between France and Britain, United States felt violated of their rights to trade freely (Childress, 2004).
Another reason that led to the declaration of the war in 1812 emanated from the British offering support to the American Indian tribes during American expansion. The British helped the American Indians in killing some of the Americans. The British hence helped in fueling the tension between the Americans and the Indian tribes (Gilbert & Hook, 2012).
In having known the reasons for the occurrence of the given war of 1812, the war emanating was inevitable. Following the British involvement in restricting the Americans in trading with some of their enemies plus the British supporting the Americans Indians to go into war with the American settlers somehow sparked a good reason for America to wage war on the British (Hickey, 2012).
References
Childress, D. (2004). The War of 1812. New York: Twenty-First Century Books.
Gilbert, E., & Hook, A. (2012). Frontier Militiaman in the War of 1812. New York: Osprey
Publishing.
Hickey, D. R. (2012). The War of 1812: A Forgotten Conflict. New York: University of Illinois
Press.
O’Neill, R., & Benn, C.. (2011). The War of 1812: The Fight for American Trade Rights.
Washington: The Rosen Publishing Group. Read More
Share:
Tags
Cite this document
(“History Essay Example | Topics and Well Written Essays - 250 words - 44”, n.d.)
History Essay Example | Topics and Well Written Essays - 250 words - 44. Retrieved from https://studentshare.org/history/1602284-history